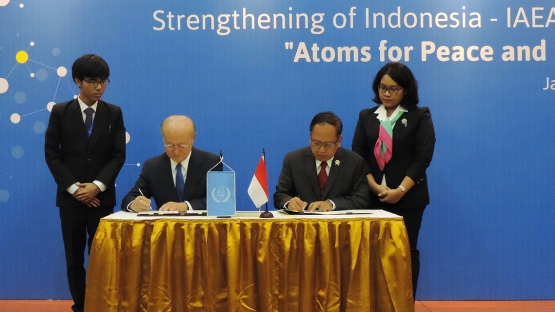 IAEA Director General Yukiya Amano praised the cooperation between Indonesia and the IAEA in bringing the benefits of nuclear technology to countries in Asia and Africa, during his visit to the country earlier this week. He pointed to areas such as enhancing food security and plant breeding, where Indonesia has assisted trainees from Mozambique and Papua New Guinea.

“Indonesia is an advanced user of nuclear technology in many areas and shares its expertise with other countries,” he said.

He highlighted the IAEA’s continued assistance in intensifying soybean production using nuclear techniques. These efforts help achieve self-sufficiency in soya food products such as soybean-tempeh. This support is part of a multi-agency programme coordinated with the United Nations Industrial Development Organization and the United Nations Food and Agriculture Organization.

Mr Amano thanked Indonesia for supporting the IAEA activities by hosting numerous regional technical cooperation events, as well as for its contribution to the Peaceful Uses Initiative, which supports capacity building efforts in nuclear techniques for development in the Asia and the Pacific region.

Mr Amano was also briefed on the consideration being given to possible nuclear power development and areas in which IAEA support would be required.  He noted that having nuclear energy is a Member State’s internal decision and the IAEA stands ready to support efforts when a national decision is made. Elements, such as the IAEA Milestone Approach, which includes public communication, stakeholder involvement and setting up of a nuclear energy programme implementation organization, were covered.

During his visit from 5 to 7 February, Mr Amano met with Vice Minister of Foreign Affairs Abdurrahman Mohammad Fachir, and spoke at the Bogor Agricultural University on Nuclear Technology for Sustainable Development.  He also attended the Executive Meeting for Regulators and Licensees in Medical and Industrial Purposes. To read Mr Amano’s addresses at these events, click on the links below:

This site uses Akismet to reduce spam. Learn how your comment data is processed.